It has been a few years since we’ve played a show in Evanston.  We’ll remedy that this Wednesday with a show at the Indigo Lounge, inside the Hotel Orrington.  Our resident bouzouki player (and food photographer) Eric Futrn will start out with a short solo set, then the full band will join him for a rocking night of klezmer.

In case that isn’t enough ChickenFat for you, we are one of the many acts featured in Milly’s Holiday Spectacular next Sunday at the Old Town School.  Your kids will have a lot of fun at this one! 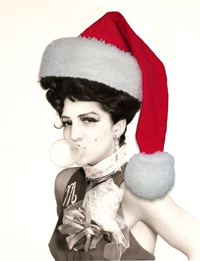 We joined Milly for her 2009 holiday show and had a blast.  Here we are backing Milly (and some dancing reindeer) on her song, “Sucker for a Trucker“:

Milly’s Holiday Spectacular is December 9th at 3:30pm.  You can purchase tickets here.

No shows booked at the moment.

We're the the ChickenFat Klezmer Orchestra, a Chicago-based band. Read more about us.